5 Ways Tactile Sensors are Changing the Future of Medical Technology

Some of these potential applications are based on concepts integrated into products that Pressure Profile Systems has already helped get to market, but most remain in the conceptual stage, awaiting an interested partner with the capital and infrastructure to develop a usable medical device.

Thanks to advances in minimally invasive surgery (MIS), surgeons have made big breakthroughs while working with a relatively small incision. And capacitive tactile sensing technology can further advance this field by making it possible to incorporate the sense of touch into such procedures.

Tactile pressure sensors embedded in the tip of a laparoscopic probe can allow physicians to, in a sense, “feel” around inside the human body through the smallest of initial cuts. A physician using MIS to remove a lesion from the lung, for example, would be provided with a visual pressure map of the target area in the body. This visual representation makes it much easier to confirm lesion location after the anatomy may have shifted upon deflation of the lung for the procedure. Using the pre-existing conventional technology, verifying the location of the surgery is tough to do without cracking the chest open and reaching in, which is, obviously, best avoided if possible.

Emergency procedures often require healthcare providers to insert a catheter into a patient’s femoral artery. But locating the critical artery can be difficult, especially if a patient is obese or moving around, for example. Capacitive tactile sensing technology has the potential to make this step much easier.

A small handheld device with sensors embedded in it, similar to a stud-finder, could, when pressed to the patient’s skin, detect the pressure exerted by the femoral artery. This theoretical device would function in a fashion similar to that of the jWotch, a blood-pressure watch that PPS helped to develop, which measures pulse waveforms via the radial artery in the wrist. Unaffected by potential interference from factors such as sweat on the skin, the device would help ensure that healthcare providers find the center of the artery by detecting where the pulse is the strongest; it would lock in and make sure the user is correctly oriented. The device could also incorporate a needle guide to indicate when and where the needle should be inserted.

Measuring the force of a patient’s grasp can be an important part of physical and occupational therapy. Conventional grasp-force measurement instruments are limited, however. They do little more than provide a quantifiable number and are unable to decipher, say, how much force is applied by individual fingers, or whether the balance of the grasp is correct. In addition, these instruments are relatively complicated to use; the patient must have his or her hand placed in just the right spot in order for them to work.

Capacitive tactile sensing technology, in contrast, could make it possible to collect a full-color, high-resolution pressure map of a patient’s grasp. A tactile sensor array could be wrapped around a cylindrical device that could be squeezed naturally, without the user having to conform to the device. Consequently, much more-detailed information about the user’s grasp could be gathered, such as to what degree each individual digit is contributing. It would also be easier to monitor the changes in grasp over time and compare it with what a normal grasp should look like. Moreover—as with the images produced by the ManoScan esophageal motility catheter that PPS helped develop—these images would be easy to understand; anyone would be able to look at them and, more or less, know if something was wrong with the grasp.

Prostheses are becoming increasingly advanced in terms of how dexterous they can be and how well they can mimic the function of the lost limb. But one of the things they still can’t replicate is the sense of touch. At least, not yet.

Although this idea is still in the early stages of conception, it might one day be possible to embed tactile pressure sensors in, say, the “skin” on the finger of a prosthetic hand, which would theoretically be able to sense how hard something is being grasped by the hand and convert that information into an electrical impulse that is sent to the brain. The functionality of the prosthetic—and, by extension, the experience and quality of life of the user—could be greatly improved.

There’s plenty of research to be done, especially when it comes to making data easily understood to the user. Perhaps initial iterations of this technology would deliver some sort of visual or audio representation. But the first part of the equation—the sensing technology—is similar to work PPS has already done with robots in terms of allowing them to sense how hard to grasp objects. This is an especially exciting area given the significant need for prosthetics among seriously injured veterans. The more we can do to help restore their normal mobility, the better.

When healthy people are putting too much pressure on their feet by standing in a certain position for too long, they get a signal—often in the form of pain or discomfort—that tells them to shift position and alleviate that pressure. However, patients suffering from advanced forms of diabetes often experience a diminished sense of feeling in their extremities called diabetic neuropathy. These patients often end up with pressure sores on their feet; in worst-case scenarios, this can require amputation. 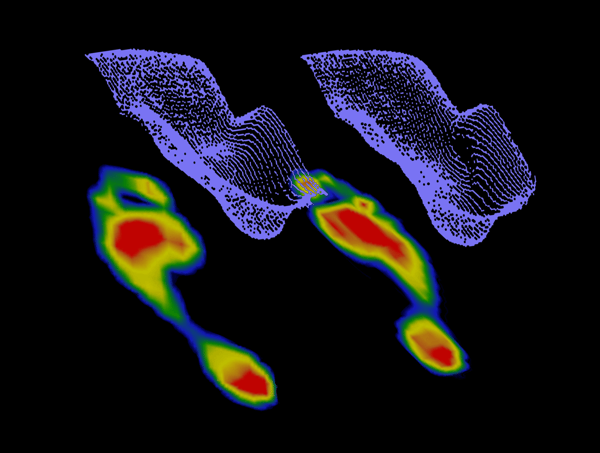 Similar to their potential use in prostheses, tactile pressure sensors could replace the sense of touch that the patient has lost. Embedded in a sock or a shoe, tactile pressure sensors could detect the pressures being put on the foot and transmit that information to the wearer via a smart phone or a watch. These devices would then tell the user to move their feet when they’re in danger of developing sores.

Interested in incorporating tactile sensors into your medical devices or products?